Charges for Regulation by the Charity Commission or is there an alternative option?

This a very current and heated issue, which i’m still very conflicted with. On one hand I do very much agree with William Shawcross, believing the largest Charities should be contributing to the regulator to fund the costs of regulating the majority of smaller charities (that’s probably the socialist in me!) – but should it not come from public taxes?

As far as my opinion goes the Treasury already supports charities quite well with their Gift Aid Schemes and other tax benefits for registered Charities. While most would say any charge for regulation should go to those who benefit from regulation, but it cannot be that simple as you can’t really charge Homeless people or animals, rare trees, users of foodbanks, cancer patients, and the list goes on. One thing all charities have to have in common, by their very nature, is that they are to benefit the Public, mostly certain specific areas or selected groups of people but over all the benefit is to the public.

The problem with this is you can’t charge those people who are using the services, you can’t charge employees, you can’t really charge Trustees as they’re offering their governance for free and you don’t really want to increase taxes to the public (as that would result in public resentment and criticism of the Third Sector and political scapegoating of the industry too). This really only leaves the current government budget being increased from its current point which means budget will need to be gathered elsewhere (We’ll shy away from current party politics and fiscal policies for now). We’re left with the following options to gain some budget back to effectively regulate;

CAVEAT: with my current experiences with the regulator I do not believe it is fit for purpose regardless of how much money you throw at it.

Lets look at some figures; 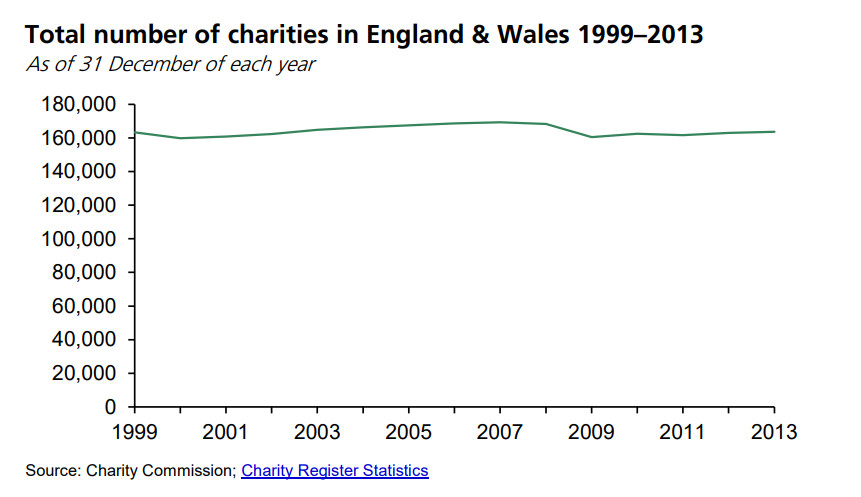 As of December 2016 78% of the revenue brought in by charities is received by the top 1.3% of charities (2201) organisations 2 , to make up the current funding for the Regulator at least to its current level (matching what they receive now)

Lets look at some options;

The current law requires charities to file their documents on time, and the burden is on the Trustees to do so, if you are not able to do so then you should not be signing up as a Trustee, I believe a fine for not filing your books is needed to encourage clear lines between the disorganised and the effective. Currently there has been an ongoing inquiry for those charities which have been late filing their books for more than two years, the cost of this inquiry will be massive, yet this could have been recouped if the charges were like other documents where the trustees directly are fined, not the charity! This will make certain the documents are provided on time and prioritised jointly by all trustees. A fine of either Â£100 in total split between the Trustees, or Â£50 each per Trustee should discourage ignorance of a legal requirement.

The Â£2.1bn contribution of the FTSE100 companies in 2014Â 3, I couldn’t find any record of more current figures, but lets just use Â£2.1bn as an example – not forgetting this is just from the FTSE100 companies, not any other company than ones listed on the exchange – if just 0.02% of this had to go towards regulation it would bring in Â£42million to the regulator, this could again be easily enacted and would put administration of such matters on to the accounts teams of the FTSE100 which would be easily able to support this function.Â

Some Charges/fines I think may appropriate to Charities themselves;

This would mean 4% of the Â£1.19bn going to the regulator, providing Â£47.6m to the regulator, which is a few million more in real terms of what they received a decade ago. The benefit of this is that its simple! Doesn’t add to the additional administration of the regulator and provides and appropriate and proportional income which would vary on the income of the sector.

Commissions current proficiency in respect of what is not only needed by charities but also what is needed by the beneficiaries of those charities does not seem to be inline. The commission currently has little open channels for the public to request help/support or advice while those charities which are abusing the law have little way of guaranteeing action and consequences to the abuse. If the commission is to continue without holding responsibility for prosecutions of those abusing charities then the funds must come from the commission’s budget and be passed to Crown Prosecution to action those needs. Very few people now believe the commission provides value for money or does what the law intended it to do. My own issues with an abused charity have taken over 3 years for the commission to open an inquiry. That is ridiculous that abuse can be ignored like that for such a period of time, regardless of what budget they have available, there are charities up and down the country struggling for funds and they manage to achieve much more!

Lets not forget this is just for England and Wales – Scotland and Ireland have their own regulator!

Public bodies like this do not usually lose their budgets without warning, nor without not showing theirs benefit themselves! The Charity Commission needs to stress, without reservation, the issues prevalent in the third sector to show why money is needed and why regulation is vital! As far is public knowledge the Commission has not delegated or partnered with other Charity organisations to support their workloads! One of the first things I would have done was make certain the day to day drivel from Mrs Jones and her WI meeting was passed over to an organisations like CVCs, those people who wanted hands on supporting advice should be passed to those local organisations created to do so! Â The regulator should be concerned with regulatory matters and their litigation to protect the industry and the massive amounts of public funds which goes with it.

In the end Charities are there to mop up the errors and misgivings of parliament to protect the public interest, it should be the government which provides the needed funds to regulate and police the industry properly. Charity abuse is one of the most detested of all abuses and those volunteering for them of their own free time must also see some protection and guarantee that when issues are exposed they are corrected swiftly and those responsible are punished sufficiently, where necessary. Sadly the Commission is already funded by Taxes paid to the government by the people of the UK, if they’re then going to charge Charities too, who are doing the jobs which are only created by an inefficiency of government mechanisms then essentially people are being taxed twice as they will pay from their taxes and from their donations to the charities.

The main problem with other options is that the Commission cannot implement or control it and only the Government may say that its a more appropriate option. My expectation is that the commission will at some point advise that charges to each charity are going to be put into place, no matter how many disagree with cost being fulfilled in that way